Scape Liquid Carbon has been developed to supply the aquarium plants an alternative carbon source to injected CO2.

Scape Carbon has the added advantage of suppressing algae growth. Scape Carbon will kill Black Beard Algae on contact. As well as various other types of nuisance algae, such as thread algae, hair algae, dust algae and staghorn algae.

Liquid carbon dioxide is a type of liquid which is formed from highly compressed and cooled gaseous carbon dioxide. It does not form under atmospheric conditions. It only exists when the pressure is above 5.1 atm and the temperature is under 31.1 °C (temperature of critical point) and above -56.6 °C (temperature of triple point). The chemical symbol remains the same as gaseous carbon dioxide (CO₂).[2] It is transparent and odorless and the density of it is 1101 kg/m³ when the liquid is at full saturation at -37 °C.[3][4] 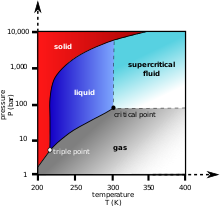 The viscosity is one of the measures of a fluid substance that is the resistance of itself. It can be described as high viscosity or low viscosity. Before the study of the viscosity of a liquid, a scientist called van der Gulik has explained how the viscosity of gas determines. He said that the increase in temperature can increase the viscosity of the gas, but it is opposite to liquid. He also proposed the influence of the molecules exerts on each other to viscosity. Another person called Brillouin also has mentioned that the concept of free path of molecules should be given up.[6] After several ideas have been mentioned and proposed, the typical image of the viscosity of liquids is that the molecule is actively bouncing in a space that is formed by other molecules when the momentum has been exchanged as collisions. Therefore, the viscosity coefficient is measured by the efficiency of exchange and by the number of collisions per unit of time and volume.[6]

The viscosity of liquid carbon dioxide is measured by using a type of viscometer called vibrating-wire viscometer at temperatures of five levels 220K, 230K, 240K, 260K and 280K that are along isotherms between 217K (triple point temperature) and 304K (critical point temperature) over the complete liquid range. The accuracy of this measurement is estimated to 0.01. By using the vibrating-wire viscometer that including a wire, there is an alternating electrical current generates the Lorentz force and an electromagnet raises a magnetic field. After the electrical current stopping, an induction voltage is caused by the free damped oscillation of the wire when it has been in the magnetic field caused by the electromagnet. The induction voltage has been enlarged, sampled and digitized and it is kept as a set of 2048 numbers on a computer disk and the data of this signal is a measure of the sample liquid for its viscosity.

When finished the common cleaning and filling process, the vessel should be at approximately 8 MPa after it has been set in a wanted and suitable temperature. However, before the above condition, the vessel needs to be pressurized at room temperature firstly. As a result, it has avoided the leakage of the liquid carbon dioxide sample and prevented the extra damping because of the insufficient equilibrium. The next step is needed to satisfy the equilibrium. Under these circumstances, the first measurement is used to determine the resonant frequency of the wire. The synthesizer delivers the electrical current that is adjusted to this frequency and measures it 5 to 7 times with a various periods of time. The resulting series of 2048 numbers need to transfer following Fourier transformation. Hence, the width and the resonance frequency are determined by using the computed signal to match with the Lorentz function. The resonant frequency is in a range of 765 Hz at 280K,350MPa to 823 Hz at 220K, 0.55MPa. The scientists have set several tables with various temperature to show the viscosity of liquid carbon dioxide.Generally, at a certain temperature, the viscosity of liquid carbon dioxide will increase, as the pressure is increasing. For example, at the temperature of 220.005 K, the range of viscosity is from 243.4μPa s at 0.559 MPa to 290.3μPa s at 22.53 MPa.